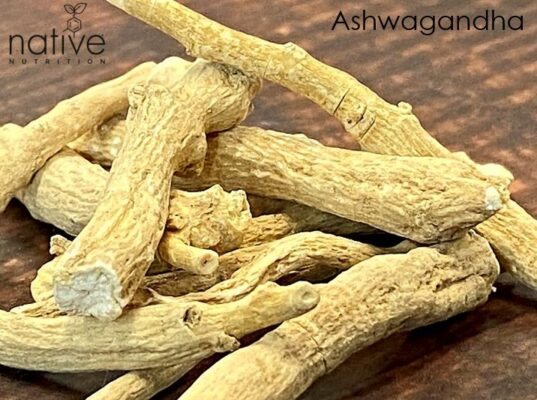 Nature has never gotten it wrong when it comes to providing herbs fit for therapeutic use. While the World Health Organization estimates that over 21,000 plant species can be used for medicinal purposes, one particular herb stands out – Ashwagandha.

It’s among the most powerful herbs that have dominated the arena for medical therapy for centuries. In fact, ashwagandha has been a time-tested favorite for over 2500 years now.

So why the popularity? It’s already stood the test of time, but does it stand up to all the hype? Let’s take a look.

What are the benefits of Ashwagandha

It’s estimated that ashwagandha was first used for medicinal purposes back in 6000 B.C. as recorded in ancient Ayurvedic texts. Throughout the centuries, ashwagandha has been a significant player in the management of emotional tension as well as physical discomfort.

As trusted as it was in times past and its growing popularity today, it’s no surprise that the list of ashwagandha benefits is pretty extensive. There are 5 benefits of ashwagandha, however, that stand out above the rest.

Though it was used in Ayurvedic medicine as a broad-spectrum medication, ashwagandha is gaining fame in the United States as a natural remedy for anxiety and stress.

Ashwagandha is classified as an adaptogen, which means it helps regulate the physiologic processes of the body, and as a result, it can help stabilize how the body responds to stress. An adaptogen, just as the name suggests, helps the body adapt to things (or let’s be honest, sometimes people) causing stress.

Several studies have been conducted on ashwagandha’s effect on anxiety levels as well. In one such study, patients who supplemented with ashwagandha saw a nearly 45% decrease in their Perceived Stress Scale (PSS) scores.

If you struggle with thyroid conditions, ashwagandha may be able to help. As you may know, the thyroid gland produces hormones (T3 and T4) that play many roles in the body, including regulation of metabolic activities, development of the musculoskeletal system, protein synthesis and differentiation of certain body cells.

Needless to say, it’s pretty important. Problems arise, however, when it starts producing either too few hormones (hypothyroidism) or too many hormones (hyperthyroidism).

So what does that have to do with ashwagandha? Ashwagandha has the potential to elevate the levels of thyroid hormones within your blood, making it a great natural remedy for hypothyroidism where the thyroid produces less T3 and T4.

A study published in the Journal of Ayurveda and Integrative Medicine explains that it does so by augmenting the action of the hormone, TSH, which in turn stimulates the synthesis of T3 and T4.

The adrenal glands are anatomically organized, which means they produce different hormones at different parts of the gland. There are 2 main parts – the cortex and the medulla.

Since the body doesn’t differentiate between good stress (such as happiness) and bad stress (such as depression and anger), the levels of these hormones are subject to fluctuation. For many people, excess stress leads to adrenal fatigue.

Adrenal fatigue can be managed with ashwagandha since it is able to decrease anxiety and lower blood cortisol levels. By lowering blood concentrations of cortisol (the body’s primary stress hormone), it inhibits increased activity of the adrenal gland, stabilizing overall adrenal function.

Ashwagandha works to regulate blood sugar levels in several ways. For instance, it increases the levels of insulin in blood while also increasing the sensitivity of insulin receptors in muscles. Together, these actions help lower blood sugar.

It also helps in lowering blood cortisol levels. Cortisol enhances the breakdown of fats and glycogen to yield glucose. This action of cortisol increases blood sugar levels, which manifests with all the symptoms of hyperglycemia.

Ashwagandha, on the other hand, slows the production of cortisol. As a result, blood sugar levels are kept in check.

Ashwagandha can increase your stamina in more ways than one. Physicians in India have increasingly prescribed ashwagandha for both men and women to improve sexual function and to increase libido. Its revitalizing properties make it beneficial when managing impotence, low sperm count, general debility and nervous exhaustion.

It also improves cardiorespiratory endurance during extreme physical exercise. No wonder it is steadily gaining preference in the world of athletics!

How to Make the Most of Ashwagandha (Hint: Focus on Absorption)

Nutrient profiles and testing continues to show us that we just don’t absorb as many nutrients from our food as our great grandparents did.

This can be attributed to changes in our soil, poor farming practices and the overuse of fertilizers and pesticides. Even if the food itself was equally as nutrient dense as it once was, most of us aren’t able to absorb properly due to consuming anti-nutrients or nutrients that compete for absorption as well as having abnormal gut flora and persistent stress.

These poor absorption rates are not only limited to food but also to herbs such as ashwagandha. The obvious way to start absorbing most of your nutrients is correcting the factors previously mentioned. That’s easier said than done though.

An effective alternative is pairing supplements with black pepper extract, which has been proven to enhance the process of nutrient absorption. In fact, it’s been clinically shown to improve the rates of absorption by up to 2000% by influencing the metabolic processes that generate energy for the body at a cellular level (known as thermogenesis).

Black pepper also boosts the mechanisms that facilitate efficient food digestion and nutrient absorption from the gut. In a way, it increases the thermal energy necessary to boost the efficiency of thermogenesis.

Black pepper extract also increases your blood supply to the gut and increases the transport of nutrients to where they need to go.

For these reasons, it is recommended to take ashwagandha along with absorption-boosting ingredients to reap the most benefits.

When we read the research on this incredible herb and discovered it for ourselves, we couldn’t help but try to make it as easy and convenient as possible for people to benefit from it.

Our ashwagandha supplement contains 1200 mg of ashwagandha root powder – a high potency dose meant to help you thrive instead of just survive. It’s also combined with 10 mg of black pepper extract, so you can absorb its vital nutrients like you should.

Unlike most supplements, our ashwagandha plus has no fillers, additives or chemicals. It’s also free from common allergens such as gluten, soy and shellfish. It is also free from dairy and nuts, making it safe for nearly anyone.

We also stand behind our belief that organic is simply better – no pesticides, no GMOs and none of the risks associated with them.

Because safety and purity is a top priority, every batch is third-party tested to ensure that it’s completely free from impurities and toxins in any form. Plus, it’s vegan – an added bonus that’s hard to find in the supplement industry.

The benefits of ashwagandha are well documented and have stood the test of time. Now with Native Nutrition’s Ashwagandha supplement, it’s easier than ever to reap its many benefits and start living life with less stress, less anxiety and just an overall healthier lifestyle. 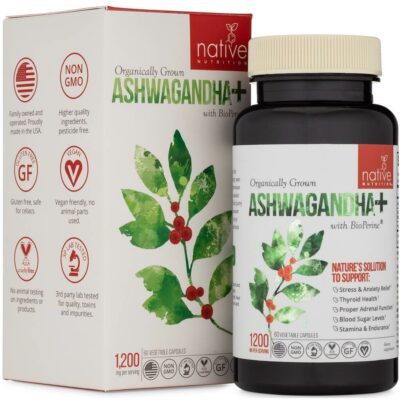